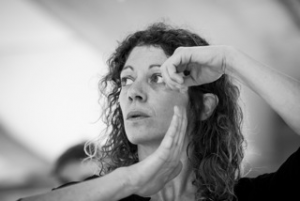 Nadine has worked for various choreographers like Dave St.Pierre Inc. Montreal, Francisco Cordova / Physical Momentum Project Mexico – Spain, Cia. Sonia Rodriguez Berlin – Spain, Stephan Herwig Munich, Katja Wachter /Selfish shellfish Munich among others. Since 2007 she has been resident in Barcelona and she has been teaching at the formation school of Anna Sanchez “Varium”. Nadine is also giving workshops and is creating dance-theatre pieces for companies and education schools throughout Europa and Argentina like in : Iwanson international school of contemporary dance Munich, where she graduated in 2001, La Caldera Barcelona, Area / Centro de creación Barcelona, Arteleku San Sebastian, Dampfzentrale Bern, Trois C-L Luxenburg, Salon Camargo Buenos Aires, Artez Hogeschool voor de Kunsten Arnheim among others. Since 2011, she has been developing her own creative project “Cia Nadine Gerspacher”, based in Barcelona. She is member of the Dave St. Pierre Company since 2012, touring with his Triology all over Europe. In 2015 she worked as a choreographer for the project “Heart ” of Cirque du Soleil. Currently she collaborates with Nicolas Ricchini in the piece ” A sweet Hello” (Premier in Germany / Munich 02.& 03. october 2016)

The class consist of a basic warm-up to rise awareness of breathing, muscle tone and stability, as well as to improve physical strength. Alternating between games, technical exercises and challenging variations. Nadine teaches her students to appreciate free movement through a well-controlled core technique. Intense floorwork enhances the awareness of space, the centre of the body and support to be able to move safely,  silently and freely. Partner work, directed improvisations as well as theatrical tasks are important components of the classes and develop the student´s playfulness and creativity in their movement and expression.