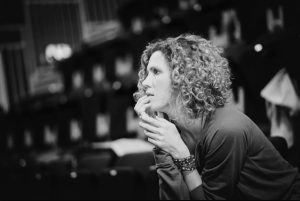 Caroline Finn is the Artistic Director of National dance Company Wales. Caroline trained at the Arts Educational School, Tring and then the Juilliard School, New York, where she attained her BFA in dance. As a dancer, Caroline has performed with Ballett Theatre Munich under the direction of Philip Taylor; Ballet Preljocaj (France); Compagnie Carolyn Carlson (France). As a freelance dancer and choreographer Caroline’s acclaimed solo work Bernadette toured internationally to festivals in Aix en Provence, Munich, Luzern, Berlin, Krakow, Paris and South Korea. Prior to starting at NDCWales Caroline created work for companies such as Tanz Luzerner Theatre (Switzerland); Cross Connection Ballet (Denmark); Compagnie DIEM (France) and Teatr Groteska (Poland). She was the winner of the production prize at the Copenhagen International Choreography competition in 2010. Between 2013/14 she presented three of her works at the Interdans Festival in Belgium and between 2012 – 2014 she created three full length works at Theater in Kempten for the opening of Tanzherbst Festival. Caroline has worked extensively with young people, creating integrative youth dance performances such as Breaking Light (2011) with Alan Brooks in the mining regions of northern France. A winner of the Matthew Bourne New Adventures Choreographer Award 2014, Caroline created a new work entitled Bloom for Phoenix Dance Theater and she is also a member of Tanztendenz München e.V.

Class begins with a short yoga sequence and/or image led-improvisation followed by floor exercises to warm the core and stretch the larger muscle groups. Moving on to centre work; exploring different dynamics and the use of weight; strengthening and releasing the body in preparation for sequences which travel through the space. All the class work builds towards learning a phrase which will be developed throughout the week. It’s physical, it’s fun and there will be sweating!