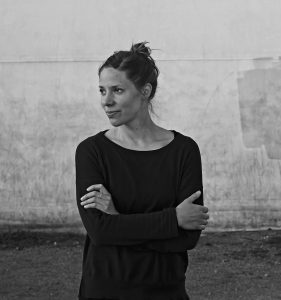 Milla Koistinen has graduated from the Theatre Academy of Helsinki, Finland in 2004 with MA in dance and from HfS Ernst Busch/HZT Berlin with MA in choreography in 2012. In 2010 Koistinen was one of the danceWEB scholarship recipients in Impulstanz Vienna.

She has worked among others with Kristian Smeds, Hiroaki Umeda, Peter Verhelst (NTGent/Johan Simons), Cie Heddy Maalem, Christine Gaigg, Hans van den Broeck and Les Ballets du Grand Maghreb. Since 2008 she has been creating her own work and her creations have been played among other locations in Tanzhaus NRW, Hebbel-am-Ufer –theatre, Mad House Helsinki, Ballhaus Ost and in Uferstudios Berlin.

Koistinen has collaborated among others with Solistenensemble Kaleidoskop, director Janne Reinikainen at the Finnish National Theatre, musician Jochen Arbeit and with soundpoet Dirk Huelstrunk.

Koistinen has been a guest teacher at SEAD, the Iceland Academy of the Arts, Sasha Waltz & Guests, Tanzhaus NRW, Tanzhaus Zürich, Theatre Academy of Helsinki, the University of Tampere, the Conservatory of Tampere, HZT Berlin, Marameo, Berlin, DOCK11, Espace Catastrophe in Brussels and PAC, Ramallah.

Focus of the class will be on dynamics, rhythm, details, explosion, silence and active decision making. The class starts with gently warming up and softening the muscles and joints. There will be a variation of exercises focusing on breathing, rooting the feet on the floor, using the weight of the body, finding ways to go to the floor and coming back up to standing. The whole class is focused on finding an alert and articulated ways of moving and to use the body in an efficient, energetic manner. We will explore how to do this in an economical way and how to divide the energy throughout the class.